Scorpions in Texas: The Ultimate Guide

Texas, the lone star state, is home to dozens of different animals and insect species. Some of the species can only be found in Texas. However, none of them are more fascinating yet frightening than the Scorpion.

A true Texan can easily recognize those eight-legged arachnids while putting on cowboy shoes so they cannot get a nasty sting as the Texas scorpions aren’t poisonous, so you don’t have to worry. But remember that they can give you a nasty sting which can be painful. In this article, we will discuss the most common Scorpions in Texas.

Scorpions are closely related to spiders and are also known as arachnids. You can easily recognize them in various cases by their large pincers and curling stinger. Most of them prefer dry habitats, but there are other species in Texas that you’ll possibly encounter. Texas scorpions aren’t poisonous and only sting when you disturb them. These species can be seen mostly at night by using a blacklight. Also, scorpions are rare species that can fluoresce under ultraviolet rays. 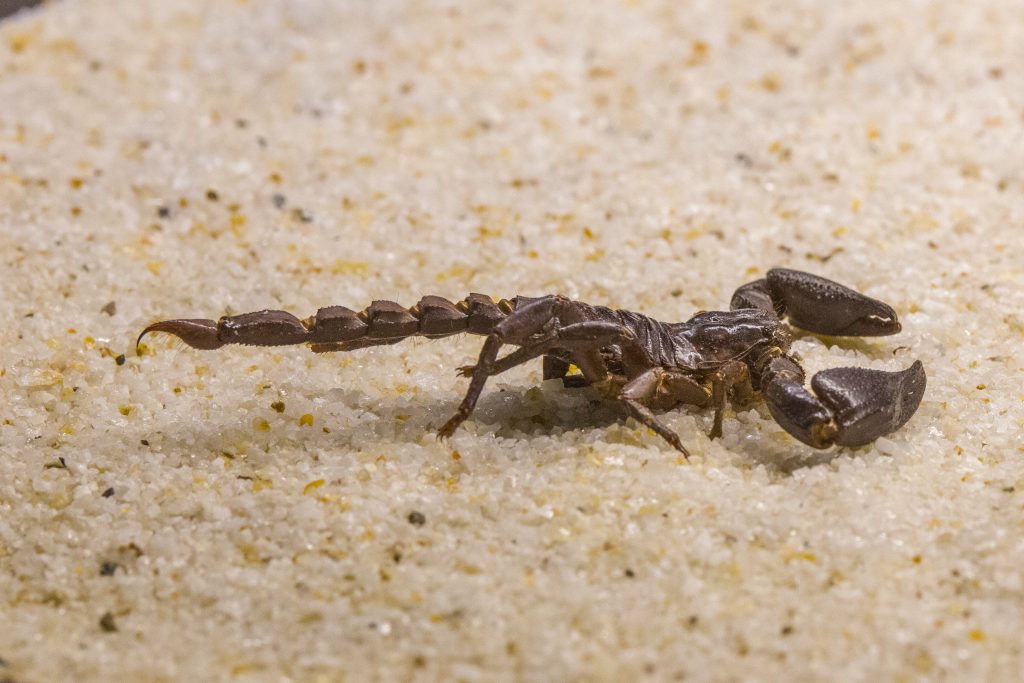 What Are The Types of Scorpions in Texas?

There are around twenty species of Scorpions found in Texas. In this article, we will discuss a few of them. So let’s have a look.

The Strip-Bark Scorpions are one of the rare species you can find throughout Texas; these are most common in Central Texas. If you encounter them, they can sting you, but the sting can cause only a moderate reaction in some people. If you get a sting from them, rubbing an ice cube will be effective. But remember that no allergic reaction should be axiomatic.

They prefer to remain in shelter during the daylight to balance the water level and regulate temperature. These waxy cuticles light up blue under a black light, and the reason is yet to be discovered. These are the most common scorpions you’ll encounter within homes in Texas.

The Straight-Faced Solifugid is quite different from the other types of scorpions found in Texas. They can walk only on three pairs of legs and use their slender first pair as sensory organs, which isn’t similar to other species. Also, they have vertically twisted jaws, be careful around them because they can cause an extremely painful bite. The jaws of these scorpions are the largest compared to the size of terrestrial invertebrates.

Their nickname is “Wind Scorpion” due to their speed and agility in rugged desert landscapes. They aren’t venomous, but they can cause mechanical damage with pincers. As they do not produce any venom, they are not considered “true scorpions.” However, they are still included in the scorpion family.

As the name tells us that these species are usually found in and around the caves in Texas. These scorpions can produce venom, but if they bite you, it’ll feel like a bee sting, meaning there is nothing to worry about. Sometimes Cave Scorpion can be found in homes near-natural areas. They look for cave-like areas but also nestle underwood stacks.

These species are the most opportunistic and patient predators, nourishing mainly on cave crickets. Other than Striped Bark Scorpions, this is the only species you can encounter in Central Texas but not commonly. Only an aspiring entomologist can find Texas Cave Scorpions.

You can encounter the Lindo Scorpion from Western Texas to the North of Mexico that touches the Texas borders. With a short and sticky tail and a dark reddish-brown color, also known as the Digging Scorpion. The name “Digging Scorpion” is that burrowing in the desert sand is similar to digging. The Lindo Scorpions are closely related to Emperor Scorpion.

This Scorpion species is quite slow in growing, and its lifespan is assumed to be long. They take around eight years to reach sexual maturity. Sometimes Lindo Scorpion is misidentified as Diplocentrus diablo because they aren’t commonly identified.

Scorpions this species originated by boats in the tropic. People confuse it with its name and think it might have originated from Florida. You can find these species under the woodpiles, stones, and inside the homes in Texas. If you ever encounter them, there is nothing to worry about but handle the situation with care. They can survive in captivity. Also, these are common aquarium pets.

The Giant Hairy Scorpion is one of the biggest species of Scorpions found in the United States. As the name implies, people consider it scary. However, it doesn’t cause any severe harm to humans. It can cause some allergic reactions, so you must be careful while exploring under the rocks, particularly in and around San Antonio.

Due to the heavy size, they rely on other scorpions for feeding and numerous other prey such as lizards and snakes. They can produce mild venom, but still, they are considered the most aggressive and active scorpions that should be handled with caution.

The “Lesser Striprtail Scorpion” is a medium-sized species you can see throughout Texas and Northern Mexico. They can survive in numerous habitats and can live at over 7,000 feet. They are mainly a burrowing species that can easily be found using a black light to seek out under the rocks and debris.

Be cautious around them because they are venomous. If they bite, their sting can last up to 15 days or anywhere in between, and it is extremely painful. No medical side effects are found after the neurotoxic venom leaves your system. However, mild swelling and edema may occur during that period. The female species are more painful as they tend to be the largest of the sexes.

The most common type of Scorpion found in Texas is the Striped Bark Scorpion, Centruroides vittatus. Adult species are about 2 1\2 long. They have a yellowish tan with two broad, dark strips running the length of the back and a dark triangular spot found above the eye in front of the head. Their slender pedipalps and long, slender tails can easily identify these in Texas. The tail in males is longer than in females.

Are Scorpions Common in Texas?

Texas has nearly 20 species of Scorpions, but the most common is the Striped Bark Scorpion which occurs throughout the state and can be seen in abundance in Central Texas. These species can produce venom and can sting. But there is nothing to be concerned about because their sting causes only a moderate reaction in some people as their poison causes some reaction in the nervous system.

How Do You Get Rid Of Scorpions In Texas?

True Texans know that Scorpions can be a major problem. Specifically when these pesky creatures invade your home and create a mess. To get rid of them, you should know what the scorpions are attracted to. They like mostly dry, warm environments. Scorpions often seek shelter and invade your home during the colder months. They also like moisture, so if you have a leaking pipe, you should fix it at your earliest. Also, make sure to keep your home’s humidity level down.

These species hate the smells. So you can use these scents to deter them. Some of those scent includes are:

Puffing these fragrances at the places where you find those pesky creatures can be helpful in deterring them.

What Months Do Scorpions Come Out In Texas?

As we have mentioned earlier, scorpions usually love to thrive in dry habitats. So you can see these pesky creatures invading your homes during the hot months, usually from July to August. The temperature is the driest and hottest during these months. That’s why scorpions can be seen easily. However, we cannot say you won’t encounter scorpions during colder months. It is possible to have a glimpse of these species in cold weather. But the summer is their most common mating season.

Are There Poisonous Scorpions In Texas?

Yes, there are many poisonous scorpions in Texas. The most dangerous is the bark scorpion, which is found in the southern and western parts of the state. Other less dangerous, but still poisonous species include the hairy desert scorpion, striped tail scorpion, and Mojave green scorpion. These can cause serious health problems if their venom is injected into humans.

What Do You Do If You Get Stung By A Scorpion In Texas?

If you are stung by a scorpion in Texas, it is essential to seek medical attention as soon as possible. The venom of some species can be very harmful to humans, causing severe pain, swelling, and even death in some cases. If you can identify the type of scorpion that stung you, this will be helpful information for medical personnel.

What Parts Of Texas Have Scorpions?

Scorpions are found in all parts of Texas but are most common in the southern and western regions of the state. This is due to the warmer climate in these areas, which scorpions prefer.

Most scorpions in Texas are nocturnal hunters and sleep during the day. They prefer to be alone and will only hunt or sleep in pairs if necessary. When night falls, they come out to prowl for food entirely solo. If it gets too hot during the day, they will find a cool place to curl up and sleep until evening.

What Time Of Year Are Scorpions Most Active?

Scorpions are most active during the year’s warmer months, from April to October. During this time, they are more likely to be out hunting for food and mates. The cooler months are spent in hiding, where they will remain until the weather warms up again.

No one thing will kill scorpions instantly. However, there are several methods that can be used to kill them quickly, such as using a strong insecticide.

Do Scorpions Get In Your House In Texas?

Scorpions can and do get into houses in Texas. They usually enter through cracks and crevices in the foundation or walls. Once inside, they will hide in dark, cool places like closets and attics. To prevent them from getting in, seal any openings around your home and remove any potential hiding places.

Yes, scorpions can climb walls. They have special claws that allow them to grip smooth surfaces like glass or plastic. This makes it easy for them to enter homes through open windows or doors.

Do Scorpions Hibernate In Texas?

Scorpions do not hibernate in Texas. However, they will spend the winter months in hiding, where they will remain until the weather warms up again.

What Do Scorpions Hate?

Scorpions hate several things, such as loud noises, bright lights, and strong smells. These can all be used to repel them from your home.

Nearly 20 species of Scorpions are found in Texas. Some of them are venomous, while the other ones aren’t. Their favorite season to thrive is summer. They prefer to live in the warmer, driest atmosphere. Usually, they invade your homes during the hotter months of the year. You can eliminate them by puffing the scents they hate, such as peppermint, lemon, and others. We have mentioned around seven species of Scorpions that are easily found in Texas, and the most common of them is Striped Bark Scorpion.

If you have any questions or concerns about getting rid of scorpions in Austin, San Antonio, Houston, Dallas, Fort Worth, or any other part of Texas, be sure to contact a professional pest control company like us for assistance.