The Black House Spider, also known by its scientific name of Badumna insignis, is a species of spider native to Australia. It is a member of the family of spiders known as Desidae.

Also known as the grey house spider, it is most commonly found in urban areas, where it builds its web in sheltered locations such as under eaves or in window frames.

If you’re interested in learning more about spiders, you’ve come to the right place. This guide will give you everything you need to know about black house spiders, including their appearance, habitat, diet, and behavior.

By the time you finish reading this guide, you’ll better understand these fascinating creatures.

What Are Black House Spiders?

The black house spider is a member of the funnel-web spider family found in Australia. Their bites can be painful but are rare due to their timid nature. Black house spiders are dark brown or black and have a body length of up to 0.7 inches (18 mm). The female spider is usually larger than the male.

These spiders are commonly found in urban areas and build their webs in sheltered locations such as beneath eaves, window frames, and corners of rooms. They primarily eat insects that become caught in their webs. 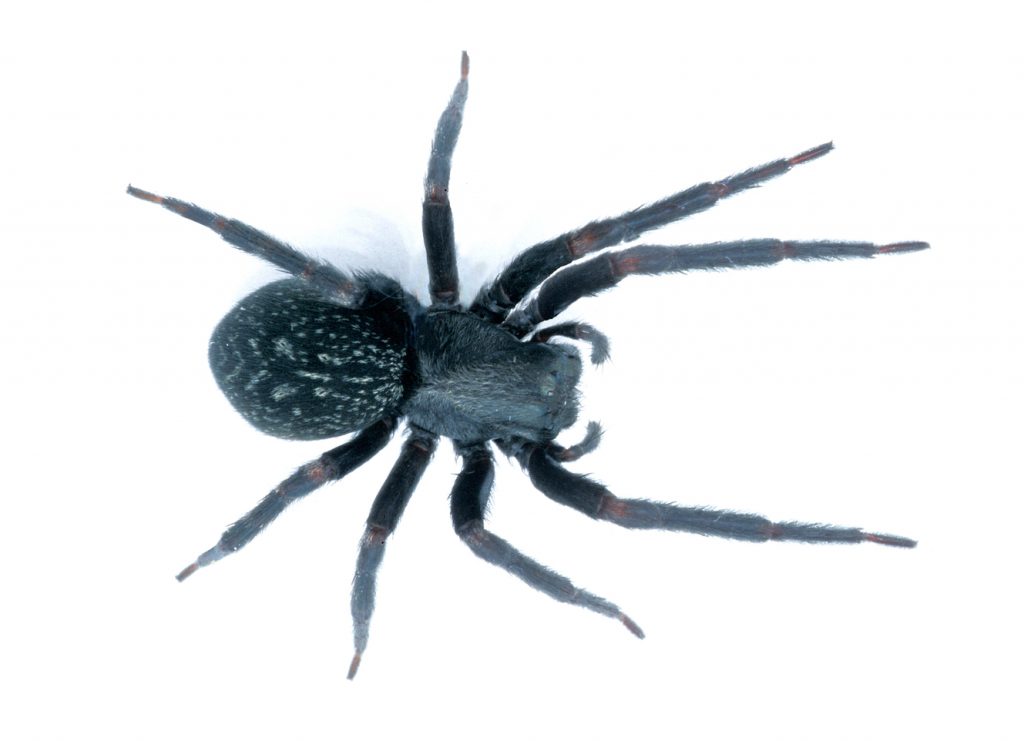 About Habitat And Spider Webs

It is found in various habitats, including forests, rough-barked trees, and urban areas. It typically builds its web in dark corners, such as basements or sheds. The web of the black house spider is generally messy and irregular in shape. They have white silk egg sacs and the black spider has light markings on it.

It is a timid creature that will usually try to flee when disturbed. If it feels threatened, it may bite in self-defense. However, the black house spider’s venom is not considered dangerous to humans.

Also Read: How To Get Rid of Ants in Bathroom?

Is a Black House Spider Poisonous or Deadly?

The robust spider is not poisonous or deadly to humans. However, their bites can be painful and cause swelling, redness, and itching. If you are allergic to spiders, you may have a more serious reaction to a black house spider bite.

If a black house spider bite you, it is important to clean the wound with soap and water. You can also put a cold compress on the bite to help reduce the swelling. Please see your doctor or go to the emergency room if you have any concerns.

How Do I Remove a Black House Spider?

If you have found a black house spider in your home, there are a few things you can do to remove it.

If you can’t find the spider or its web, your next best option is to vacuum it up. Use a strong vacuum cleaner with powerful suction to suck up the spider and any egg sacs or webs it has left behind. Be sure to seal the vacuum bag tightly before disposing it in an outdoor trash can.

If you’re still having trouble getting rid of the black house spider, your last resort is to call an exterminator like Texas Bug Control. Pest control professionals can identify and remove the spider quickly and efficiently. We will also be able to help you prevent future infestations.

Also Read: What Does a Baby Cockroach Look Like?

What Does A Black House Spider Eat?

The black house spider is a species commonly found in various parts of the world. These spiders prey on small insects, such as flies and mosquitoes. Also, they can eat other spiders as well.

Where Do Black House Spiders Come From?

Black house spiders are believed to come from Australia originally. However, they have now spread to other parts of the world, such as Europe and America.

Are Black House Spiders Good To Have?

There is some debate as to whether or not black house spiders are good to have around. Some people believe that they help to keep the insect population under control. Others argue that these spiders can be dangerous, as their bites can cause swelling and pain.

Should I Leave Black House Spider?

If you have a black house spider in your home, you may be wondering whether or not you should get rid of it. Ultimately, the decision is up to you. However, if you are concerned about your family’s safety, removing the spider from your home may be best. Call a professional exterminator to help you safely get rid of the spider.

How Do I Keep Black House Spiders Away?

If you want to keep black house spiders away from your home, there are a few things that you can do. First, make sure that your home is free of insects. These spiders typically prey on small insects, so if there are no insects in your home, the spiders will have nothing to eat and eventually move on.

Also, seal any cracks or openings in your home. These spiders can squeeze through very small spaces, so it’s important to ensure they can’t get into your home in the first place. Finally, consider calling a professional exterminator to help you eliminate any black house spiders that may have already made their way into your home.

To sum up, the black house spider is a species that commonly inhabits urban areas. These spiders can be found in houses, gardens, and other artificial structures. Although not aggressive, their bites can be painful and cause swelling.

It is important to be aware of these spiders’ dangers and take precautions to avoid being bitten. With its large, round abdomen and long legs, the black house spider is an impressive-looking creature.