12 Most Common House Spiders In Texas

Do spiders freak you out? Or are you one of those people who find them fascinating? If you’re in the latter category, you’ll want to read about some of Texas’s most common house spiders.

While some of these spiders may be harmless, others can pose a severe threat to your health and safety. That’s why it’s essential to be aware so that you can take steps to protect yourself and your family.

Below, we’ll look at 12 of Texas’s most house spider species. We’ll also provide information on each spider’s appearance, habitat, and potential dangers.

From the brown recluse to the jumping spiders, let’s introduce you to some of the eight-legged creatures lurking in your home.

The long-bodied cellar spider is one of the most common spiders in Texas. This spider is usually found in dark, damp places such as cellars and basements. With color variations of dark brown or black and light yellow stripes on their head or faces, these spiders typically live in dark and moist environments.

They may be inside homes or buildings as they are found near the ground. You may see them on walls close to the floor, where they usually hunt for food.

The brown recluse spider is one of the most feared spiders in Texas. It’s brown with a dark violin-shaped mark on its back, and it can grow up to 1/4 of an inch long. These spiders are reclusive by nature, so they’re often found in dark corners and closets.

They’re also nocturnal, so you’re unlikely to see them during the day. While their bite is not usually fatal, it can cause severe tissue damage and even necrosis (tissue death). 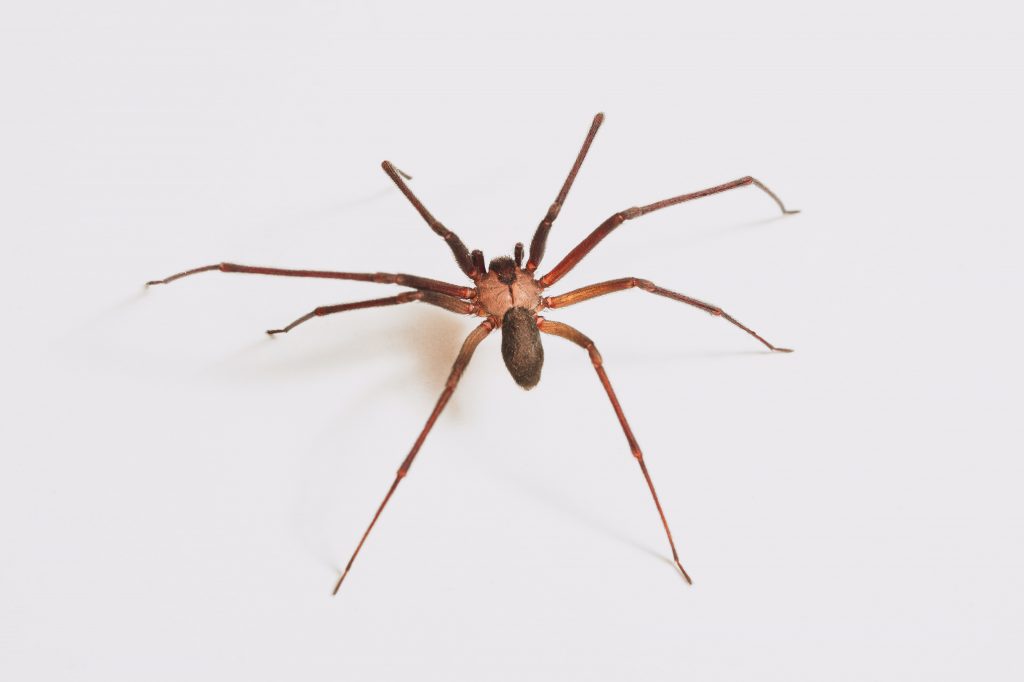 The crab spider is another common type of house spider in Texas. With eight eyes and spindly legs, these spiders are primarily light-colored with darker bands on their bodies. The longevity of most common house spiders in Texas is 1-2 years. They are good to own as pets, and it is legal to own them.

The adult size of these spiders is typically ½ inch. Their diet consists mainly of other insects which they capture and kill. Their fangs, of which there are two sets, help them inject venom into their prey and break open eggs for food. Crab spiders are found in fields of flowers or around other plants, waiting to catch their next meal.

The wolf spider is a giant, hairy spider commonly found in Texas homes. These spiders are brown or gray with dark stripes on their backs. They can grow about 1 inch long and are often found in dark, undisturbed areas like basements and crawl spaces.

While their bites are not usually deadly, they can cause serious medical problems, including muscle cramps, nausea, and difficulty breathing. Also, there are various species of these spiders in multiple forms.

The black widow spider is one of the most venomous spiders in Texas. It’s black with a red hourglass-shaped mark on its abdomen. These spiders are usually found in dark, undisturbed areas like basements and crawl spaces.

They grow to be about 1/2 of an inch long. Their bites can cause serious medical problems, including muscle aches, nausea, and difficulty breathing. In rare cases, their bites can even be fatal.

Like an orb weaver, the grey wall jumping spider has a slender body and long legs. What sets this spider apart is the vertical stripes on its abdomen. With a name like “jumping spider,” it’s no surprise that this species is known for its acrobatic abilities. They can leap several times the length of their bodies to catch prey or escape predators.

These spiders are found throughout the United States, including in Texas. They build webs to catch prey, but they also hunt on the ground and trees. Their diet consists of small insects, such as ants, bees, and flies.

The Carolina wolf spider is a giant, brown spider with long legs. It is one of the most common spiders in North America. These spiders are not aggressive and will only bite if they feel threatened.

Wolf spiders are found in various habitats, including forests, fields, and gardens. They hunt at night for insects, such as beetles and moths. These spiders are also known to eat other tiny spiders.

The woodlouse hunter spider is a small to medium-sized spider common in Europe and North America. As its name suggests, this spider preys on woodlice, small crustaceans living in damp environments.

They are found in various habitats, including gardens, forests, and caves. Woodlouse hunter spiders are brown or black with striped legs. These spiders are not considered to be dangerous to humans.

The yellow garden orb weaver spider is common in North America. It gets its name from the yellow markings on its body and the fact that it builds webs in gardens. The males have dark spots on their abdomens, while the females have two light stripes. These spiders are harmless to humans and help control insect populations.

Therefore, they are carnivorous by nature and require a diet composed mainly of insects and other spiders. Also, the spiders have a very long lifespan for spiders, often living up to one year. They are not particularly harmful to humans but can deliver a nasty bite if they feel threatened. These spiders are pretty interesting to keep as pets and are perfectly legal to own in most states. As adults, they generally grow to be 1-6 inches long.

The garden spider is a giant spider commonly found in Texas gardens. These spiders are black with white markings on their abdomens. They can grow about 2 inches long and are often found in gardens, bushes, and trees. While their bites are not usually deadly, they can cause serious medical problems, including swelling, redness, and itching.

American nursery web spiders are easily recognizable with multiple eyespots on their abdomens. These arachnids can be brown or black, with some having a light tan body and a wide brown stripe down the middle. Meanwhile, others may have thick cream markings down the length of their bodies.

They are concentrated in low shrubbery and areas with high weeds. They have adapted to live in these conditions to stay hidden from potential predators and prey. As ambush predators, they will wait for an animal to come close enough before attacking with their chelicerae and capturing it.

The long-bodied cellar spider is one of Texas’s most common house spiders. These spiders are typically non-aggressive and will run away from humans if they feel threatened. Standing on their hind legs and putting up their front legs makes them appear more prominent to scare away potential threats. If you are bitten by one of these spiders, it is rare but can be pretty painful because of their large fangs. However, the venom is harmless and won’t cause any more pain.

Most Common House Spiders In Texas

Are Spiders Dangerous in Texas?

In general, spiders are not something to be worried about in Texas. However, it is crucial to be aware of the few dangerous species. If you think a scary spider has bitten you, seek medical attention immediately.

What Is The Most Common Spider In Texas?

What Are The Most Common Spiders To Find In Your House?

Besides the common house spider, some of the other spiders you might find in your home include the wolf spider, black widow spider, brown recluse spider, and hobo spider. While most of these spiders are not aggressive, the black widow and brown recluse can be dangerous if they bite you. If either of these spiders bites you, it is essential to seek medical attention immediately.

How Do I Identify A Spider I Found?

There are a few things you can look for to identify a spider. First, look at the number of legs. All spiders have eight legs. Also, look at the shape of the body. Spiders typically have an oval or round-shaped body. Then, look at the size of the spider and compare it with our guide.

Some spiders can get quite large, while others are very small. If you are still unsure of what kind of spider you have found, you can always take a picture and use Google lens for identification.

Is A Brown House Spider Poisonous?

No, brown house spiders are not poisonous. But the bite can cause a mild reaction in some people, such as itchiness, redness, and swelling. If you are allergic to spider bites, you may have a more severe reaction.

How Can I Keep Spiders Out Of My House?

You can do a few things to deter spiders from coming into your home. First, make sure to seal up any cracks or openings around your doors and windows. You can also use spider repellent or keep spiders away with essential oils. Finally, vacuum regularly and remove clutter from your home to reduce the places spiders can hide.

How Do You Identify Common House Spiders?

There are a few ways to spot common house spiders. Look for the webbing they leave behind, usually in the corners of rooms or near doors and windows. You can also look for spiders in dark, secluded areas like basements and closets. Finally, keep an eye out for egg sacs, often white or gray and spherical.

Are Most House Spiders Harmless?

Yes, most house spiders are harmless to humans. However, there are a few exceptions, like the black widow spider and brown recluse spider, which can be dangerous if they bite you. If either of these spiders bites you, it is vital to seek medical attention immediately.

What Spiders Should I Worry About?

As we mentioned before, the black widow spider and brown recluse spider can be dangerous if they bite you. If either of these spiders bites you, it is crucial to seek medical attention immediately. Other than that, not many spiders pose a serious threat to humans.

Why Are There Spiders In My House All Of A Sudden?

There could be a few reasons why there are suddenly spiders in your house. One possibility is that the weather has changed, and it is now cooler outside, so the spiders are looking for a warm place to stay. Another option is that you have recently brought something into your house (like a box or piece of furniture) with spiders. Finally, it could just be that there are more spiders around in general.

Can Spiders Cause Any Damage To My House?

No, spiders generally do not cause any damage to your house. However, their webs can be unsightly, and they can sometimes be a nuisance if they get into your food or clothing. Additionally, some people are allergic to spider bites, which can cause more severe reactions.

What Is The Friendliest Spider?

Chikunia bilde is a jumping spider species known for being particularly friendly to humans. These spiders are often found in houses and are not considered dangerous. They are also relatively small, so they are not likely to scare anyone.

Do Spiders Bite At Night?

There is no definitive answer to this question, as spiders can bite any day. However, some people believe that spiders are more likely to bite at night because they are active hunters during this time. Additionally, it is easier for spiders to go unnoticed in the dark, so they may be more likely to bite someone by accident.

A few different scents are known to repel spiders, including citronella, lavender, and peppermint. You can use these essential oils to make your spider repellent or purchase products that already contain them.